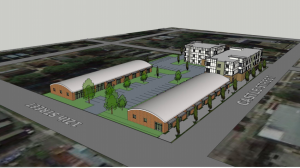 The project would consist of the redevelopment of a former Wave Transit bus depot and turn it into a mixed-use development.

Wilmington is no stranger to mixed-use developments but as of yet, there have been none that include ‘affordable’ housing. If the city agrees to move forward with the project, 14 of the 24 residential units would be reserved for families making less than 80% of the area median income.

The plan from the development team which includes Hipp Architecture & Development, PC, Cape Fear Land Trust, and, Cape Fear Habitat for Humanity, was first presented late last year but was initially not looked upon favorably by the city.

“The original proposal, presented in October 2019, was approved for the purpose of entering into an exploration phase. During this phase, staff assisted the Developer in resolving concerns of existing site conditions, public engagement, and further refining the project plan,” according to the City of Wilmington’s agenda.

After several requests, the city did grant the team more time to iron out their plans.

“There were two extensions of the exploration phase. During this extended time, there was a Phase II Environmental Assessment completed by Woods Engineers. The results of this assessment indicated there are some areas of the property with environmental concerns, particularly in relation to the existing rear building and around the above-ground fuel tank. Soil contamination from fuel is the concern in these areas,” according to the City of Wilmington’s staff report.

“The final project design will determine the remediation requirements for the project. One of the actions outlined in the MOU is that the Developer must finalize and submit project plans to North Carolina Division of Environmental Quality (NCDEQ). A brownfield agreement with NCDEQ must be obtained for the property and is required by most financial institutions for project lending,” the report noted.

While affordable housing has always been a talking point of the project, the most recent revisions of the plan has increased the number of residential units in the project.

“On June 4, 2020, the Developer submitted revisions to the proposed plan. These revisions include: increasing the residential units from 18 -20 to 24 units; reducing the new commercial space from 7,200 sq. ft. to 4,206 sq.ft.; renovating the front building into 9 retails spaces; and, renovating the rear building to serve as the new home for a local community service agency to include a public meeting space. The number of handicap accessible residential units increased from two to five. On-site parking increased from one space per residential unit to 57 spaces total, 24 residential and 33 commercial,” according to the report.

The development team has reportedly met with members of the community to receive input on the proposed project as well as worked with commercial tenants to try and meet the needs of the community. An additional 90 days has been requested by the team to finalize a purchase development agreement (PDA) which would be presented to the City Council in September of this year.

City Council will vote on the MOU at their Tuesday, June 16 meeting.