WILMINGTON, N.C. (WECT) – The last several years have been full of unknowns as we now enter the third year of this pandemic. That is especially true for the nonprofit sector, which relies on donations and fundraising events — many of which have either been canceled or held virtually over the last two years.

Cape Fear Habitat for Humanity is the perfect example. It’s Golden Hammer Fundraising Breakfast was called off because of covid-19 two years in a row, but it’s back on next Tuesday.

Despite not having this fundraising event, donations have still been strong for the nonprofit during the pandemic. According to the executive director, the lack of affordable housing has been a huge concern for our community over the last several years, which has translated into dollars for Cape Fear Habitat.

“We’re really fortunate in that the community stepped up,” Executive Director Lauren McKenzie said. “But we can only do so much as an organization and we want to do more and we can do more if we have more funding — so I think through the pandemic we have been grateful for the support, but we need it going forward. This is not a, you know, several month or several year solution to the problem. It’s going to take, you know, a lot of effort and funding and investment.”

Over the last five years, the organization has grown tremendously, quadrupling the number of families it serves. Traditionally, Habitat has created affordable housing, but now it creates AND preserves affordable housing through its rebuild program.

“We have historically built around 8 to 10 [homes] and we’re growing to 20 — and then we would also like to add in our rebuild program, which serves families who are already in their homes and that gets us to our 50 number of families served,” McKenzie said. “We’re really growing over the past five years — we’ve quadrupled the families we’ve been able to serve.”

The rebuild program helps those on limited incomes return to their homes and stay in their homes.

“You see it every day — you see families move away from the region because they cannot afford to live in Wilmington anymore and what we want to do is make sure they have a stable place to call home and a lot of times that’s very simple repairs for them, you know, maybe it’s plumbing, maybe it’s electrical,” McKenzie said. “Wilmington has been around a long time, so 100-year-old homes need that kind of stability and repair work.”

“There are social workers, our educators, our firefighters — and for folks who don’t think that they can qualify for the habitat program — I would just ask them to look into it because that’s really the biggest thing for us is making sure that people know that the program is a homeownership program for families in our community and we need those essential workers to stay here,” McKenzie said.

The organization is celebrating 35 years this year, and in that time some families have already paid off their affordable mortgage. Homeowners spend no more than 30% of their monthly income on housing.

The organization also has a new warehouse space that allows them to be lean and efficient. The space cuts down construction waste and streamlines the building process because they are not reliant on weather.

Cape Fear Habitat will hold it’s Golden Hammer Fundraising Breakfast on Tuesday, March 15th. It will be from 7 a.m. to 8:45 a.m. at the Burney Center at UNCW with the theme, Cape Fear Habitat Builds Community. You can register for the event here or make a donation if you are unable to attend.

“We’re very fortunate to have Cape Fear Habitat Restore — so they help cover our administrative costs, so every dollar that someone donates to Habitat goes directly into our building program,” McKenzie said. “Everything is covered through donations, so every dollar given to Habitat means that another family is going to be able to have a secure, stable home in the future.” 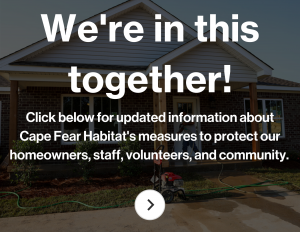